Often we just need a quick screenshot of an application window, such as a web browser, and we want to paste that into an email or word doc. For years I used the Snipping Tool built into windows, which is a great tool, but has a relatively cumbersome workflow when you just want a simple window grab and dump it into an email.
What I really want is to capture the screengrab to my clipboard so I can just paste it in.
Thankfully Windows 10 makes that easy, once you know about it.

How To Save Screenshot or Window Grab to Clipboard:

Then you can just use Paste and put the image where you want it.   It will likely be too large, so you’ll need to resize it once you paste it in.  A note on image size:  Some applications like Outlook will compress the image when resized, so you don’t end up emailing a full size large file when you only want a small version.  Other applications often keep the original resolution, so you could end up with large files.   Ideally if you have the time and it’s nice to optimize/reduce the images in photoshop or similar.
On many keyboards the Print Screen button will be a secondary function, so you will need to press the Fn key first.  For example on my Dell keyboard I would press and hold: Fn+Alt+Print Screen in that order if I wanted to capture a window. 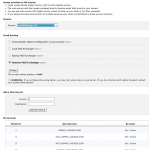